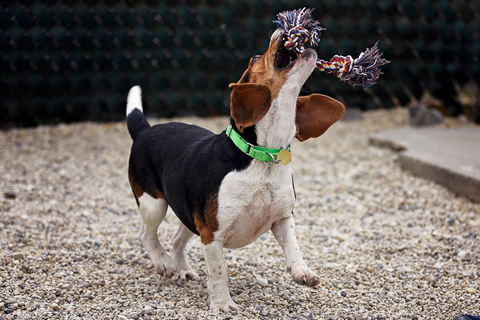 As the proud owner of a new puppy you are probably dealing with two very common “issues” that are typical of young dogs. The first issue that I hear questions on the most would be potty training, and the second would be nipping or “biting”. Housebreaking a puppy takes work, but with a little knowledge and some specific rules it can be much easier than anticipated.

When bringing a new puppy into the home it is important to know two facts. An eight week old dog cannot hold his bladder for a long period of time and he doesn’t know that he is expected to. When the puppy lived with mom, he was allowed to walk two feet from his bed and pee and then walk back and lay down. Now he is in a new environment where people get mad when he follows the rules that mom set up for him. We need to teach the dog a new set of rules, don’t go to the bathroom in the house and go to the bathroom outside in a timely manner. Keep in mind that to a dog the house is just a place, carpet and rugs are meaningless to him, your bedroom is not special, anywhere is free game to do his business. I take a young dog out about every thirty minutes to go outside when I first bring them home. Teach a word for going such as “go outside.” When he does go, immediately praise him, give him a treat, and repeat his command for going. Once that is in place I start expecting the dog to go every time I take him out. If the dog refuses to go after a reasonable amount of time because he wants to walk around and sniff I will take him inside and put him in a cage for fifteen minutes. This prevents the dog from coming inside and peeing on the floor immediately. After fifteen minutes I will take him outside and tell him “go outside” as we wander around until he goes and I will then praise him for going.

The dog should now know that we like when he goes outside, so we need to teach him that we don’t like when he goes inside. The key to this is NEVER letting him out of your sight until you trust him. Use gates, playpens, etc. or just follow him when he wanders off. If he goes and you don’t catch him, it is too late to correct and your potty training will be set back. Every “accident” should be a learning experience for you and the dog. If I see him going I will say NO in a firm voice, rush him outside, and praise him if he finishes out in the yard. Keep in mind that every dog is different, you can change the loudness and harshness of your voice based on the dogs temperament. The goal is to get across the point that you aren’t happy, not to terrify the pup. This is a system that works very well, but a lack of consistency will undermine your efforts. The first month will not be fun, following your dog constantly and always watching, but it is very attainable to have a fully potty trained dog by four or five months of age.

Nipping is the second issue that I hear questions about frequently. Young dogs nip each other constantly throughout the day as the play, and they learn certain rules. They learn not to nip too hard, or the other dogs get mad and not to nip “mom” when she isn’t in the mood. We now want to teach the pup not to ever nip humans. A nip is one of two things, a dominant type of play or a correction, neither of which should be used on humans whether child or adult. When the dog is eight weeks old I gently correct the nips by pushing the dog away and saying “no” in a firm voice. Don’t yell the word, but it is equally important not to use baby talk as you tell him no. If the puppy is in a rambunctious mood I will find a toy and start playing with him. It is important that the dog doesn’t learn to nip so that we play with him, so I always correct and then take my time finding a toy to play with. If the dog gets worse the more you correct there are many different ways to address the issue. If a dog is extremely persistent, a leash and collar can be left on him so that he can be given a leash correction each time he crosses the line and the hand corrections don’t work. If neither of these two approaches works, chances are you have a dominant puppy and may need some professional advice on how to proceed.

As you progress in training your dog and teaching him manners it is very important to keep in mind that dogs are pack animals and do not learn like humans. You cannot rationalize or negotiate with a dog and still maintain you position as the leader. When finding a trainer be leery of anyone who goes to either extreme in methods of training. Some trainers want to give dogs treats for everything and never correct and others are extremely harsh and can break the spirit of the dog. Look for someone who understands dog behavior and maintains his leadership without resorting to food bribes or anger and aggression. If you have any questions or need assistance with your dog I would love to provide you with the knowledge to build the relationship that you want with your dog.