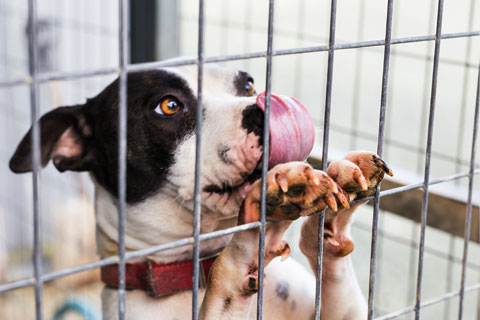 I will save you the suspense.  We are 100% in favor of kenneling all puppies when they are unattended.  A puppy generally does not have enough impulse control to resist chewing things they shouldn’t and this can lead to big trouble!  Many puppies consume things such as medicine, carpet and clothing when they are left unattended and this leads to a lot of unnecessary surgeries and even deaths. When someone tells me that they won’t cage a puppy because they wouldn’t cage their young child I tell them that is perfectly fine.  Just take the dog everywhere with you or hire a sitter like you would for a young child! You should never leave a three year old child unattended running around your home and you shouldn’t leave a young puppy in that manner either.

The first thing you need to consider when kenneling your pup is the size of the crate.  It is imperative that the kennel is tall enough to let your pup stand all the way up with their head stretched high.  If they can’t stand all the way up the kennel should be replaced immediately. They should also be able to turn around fully while inside the crate.  For a very young puppy you want the crate to be just big enough, but not too big. If it is too large they are more likely to have accidents in it. Many crates come with dividers to make them smaller for young dogs.  Once they prove that they can hold their bladder through the night you can remove the divider or buy a larger crate.

The second thing to consider is where you should place the crate.  People have many different opinions on this matter, but I prefer to crate very young puppies in my bedroom.  They have just been separated from their mother and siblings and the first few nights can be really scary for them!  If they are right next to your bed they are less likely to be scared and stressed during the night. This allows you to calmly sooth them with your voice when they wake up so that they hopefully go back to bed!  As the weeks go by you can move the crate farther from your bed and then eventually move it to your desired long term location.

Once they are able to sleep outside of the crate you are probably excited to start leaving them out when you leave!  Don’t go too fast at this point and remember that your dog’s life is at stake. If they swallow something they shouldn’t while you are at work it could have devastating consequences.  I generally wait until sometime between ten and eighteen months before leaving a dog out of the crate while I am not home. I will start with a ten minute trip and then increase the time by ten minutes each time I practice.  Don’t go from ten minutes to suddenly leaving for eight hours! That is asking for trouble.

Remember that although crating a dog isn’t something that every pup loves (at first), it is for their own safety.  Our job is to help them grow into happy well balanced adult dogs and part of that is making sure they stay safe when they are too young to be making decisions on their own.  If you size the crate properly and acclimate them to the house by letting them sleep in your room at night the process will go very smoothly. This means that you and your pup will be on the road to a long happy life together!