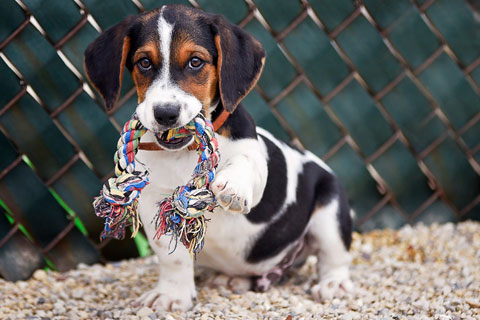 Our opinion is that tug of war can be good or bad depending on how you play.  If you play in the wrong manner it can create behavioral issues in your dog, but played in the right way it can help you raise a friendly well adjusted dog with great manners.  We have created the following 5 tips to ensure tug of war is a good experience for both of you:

Play Gently!  This is especially true if you are playing with a puppy. Puppy teeth can easily be damaged or even pulled out, so it is important to play at an appropriate level.  You should never pull harder than the puppy does and you should never pull the toy away from them. Keep in mind that sharp little puppy teeth often get caught in things and care needs to be taken when removing the toy from their mouth. With an adult dog they will likely pull far harder than the puppy and it is okay to match their level, but you should still avoid pulling harder than they do to avoid injury.

Only use one toy for tug or war.  The reason for this tip is that it teaches your dog that you don’t play tug of war with everything they find.  They will learn that you only tug on one toy and that nothing else is used for tug. You don’t want to be playing tug of war when they find a dead bird or one of your socks!

Keep the toy put up when not is use.  This tip goes hand in hand with the previous one.  You don’t want your dog learning that they can engage you in tug of war constantly.  This is a game that should be played in moderation at a time of your choosing! It is a good idea to follow this rule if you have multiple dogs inside of your home and they play tug with each other. Having the single toy that they play with and only giving it to them at certain times will make them less likely to start playing tug of war with your couch cushions!

Don’t allow “regripping”!  Regripping is when your dog lets go of the toy and then jumps to bite and grab it again.  Many people are accidentally bit when a dog tries to regrip the toy. Stop this behavior each time you see it!  This helps keep your pup from getting overly excited when playing tug and can also help your pup learn to control themselves in other exciting situations.

Tug of war can be a great game for your dog to burn off some steam and have some fun at the same time! It also can help them learn some valuable lessons that can be used outside of tug time, like drop it and general manners. Following these tips should set you up for success.

There you have it!  5 quick tips for playing tug of war with your pup!