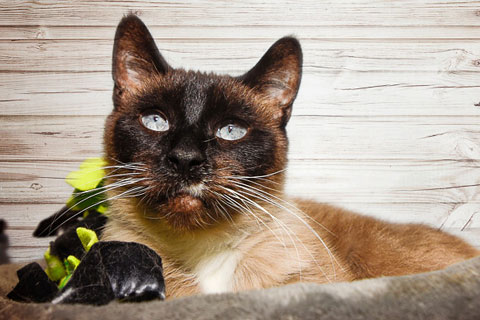 In life, cats are independent and tend not follow anyone’s rules. The same is true with skin disease in cats; it does not follow the rules. In our dog patients, different types of skin disease fall into certain patterns on the skin. In dogs the skin reacts in a predictable way. In cats there are no typical patterns and many skin diseases can look similar to each other.

Now that we know skin disease in cats has no typical or predictable appearance, let’s look at some of the more common causes of itchy skin in cats. These would include fleas, mites, insect bites, food allergy, environmental allergy, yeast, and ring worm. All of these different causes of skin disease in cats could look very similar to each other in the way the present on the skin.

Skin disease in the cat can appear in several ways. It can appear as small pin point scabs over the body called miliary dermatitis, itchy areas of hair loss called allergic atopy, crusts and eruptions called eosinophilic granuloma complex, or head and neck itching. Any of the above skin diseases could present with any of these reactions on the skin.

Once skin disease is recognized then sorting through the possible causes to reach a diagnosis and treatment plan is the next step. First simple tests are performed in your veterinarian’s office which include; skin scraping for mites, exam for fleas, tape cytology for yeast, and fungal culture for ring worm. If any of these tests are positive then treatment is directed at the positive result. For example oral medication can be given for ring worm.

If the tests are negative which often can be the case, then treating the percentages is the way to go. Interestingly, 70-80% of these cats will have flea bite dermatitis even though fleas can not be found. Therefore a one month treatment period for fleas with a product called Capstar is completed and 70-80% of the cases will clear up. This is followed by a complete treatment of the house and other pets for the next several months.

Certain mites like Demodex gatoi can be very itchy to the cat and difficult to find on a skin scraping. Hence therapeutic trials with weekly lyme sulfur dips can be completed for 6 or more weeks to rule in of out this condition.

Next approximately 17% of these cats will have food allergies. These cats can be diagnosed and treated with a limited ingredient 10 week food trial. This is usually a veterinary prescription diet such as rabbit and potato.

In the past allergies were often treated with steroids of various types. Steroids tended to be very effective in controlling the reaction on the skin and clearing things up. In the last couple years a new non-steroidal medication has emerged as a viable and safer treatment option for allergies in both cats and dogs.  This new medication called Atopica is approximately 80% effective in managing allergies for both dogs and cats. Other than a very small chance for stomach or intestinal upset, this is a safe drug.

In a simplified view of the drug, it works by slowly shifting the body’s response from an allergic response (on an immunologic level) to a non allergic response. Patients usually respond with in 3-4 weeks and stay on the medication long term.