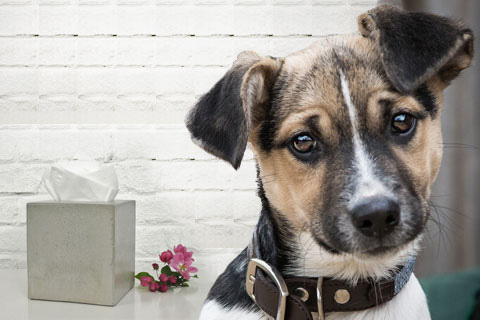 Late summer and early fall can be a difficult time of the year for many pets especially canines. Both humans and dogs suffer from allergies this time of year, known as seasonal allergies. (Atopy)

Atopy is defined as the genetic predisposition to respond allergically to certain environmental particles called allergens. Allergens generally are things like pollen, molds, dust mites, and the like. Pets that have atopy cannot help that their bodies respond allergically.

During the allergy season atopic pets become very uncomfortable. Their symptoms include intense itchiness and redness of the skin often involving the front legs, feet, and ears. Often this itching leads to sores on the skin which in turn can get infected with bacteria and yeast. This itching licking cycle can be intense and in many cases pets open sores on their skin with in just an hour or two.

In one of the biggest break-throughs in veterinary medicine in the past 25 years, scientists solved the problem of this cytokine. This problem was solved by developing specific antibodies against interleukin 31. These antibodies effectively bind up the cytokine and therefore prevent and stop the allergic response in the dog.

Zoetis, formerly known as Pfizer, did the research on this and have now developed an injectable medication with the antibodies. This medication is ultra safe because it is non-steroidal, and very targeted or selective in it's action. In fact there are no known side effects with this injectable therapy.

A few select veterinary practices across the United States, including West Suburban Veterinary Associates (WSVA), my practice in Westmont, now have this therapy. The injection is safe, 90 percent effective, and lasts in the allergic pet for approximately 5 weeks.

My own dog Cowboy, a 10 year old Maltese, is a chronic allergy patient. He received the new allergy injection about 3 weeks ago, and has never been better. Thus far our experience with the new therapy, at WSVA has been exceptional; and with out side effects.