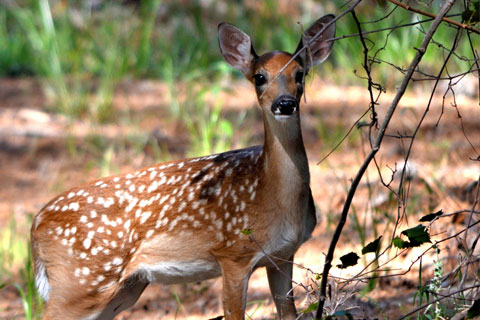 Lyme is a tick borne disease caused by infection with the bacteria Borrelia burgdorferi. This bacteria has a spiral shape or cork-screw shape, and is known as a spirochete. The disease is primarily in the dog. The tick that carries the bacteria is known as the Deer tick or Ixodes. The Borrelia organism attaches to the salivary gland of the tick; and then is transmitted to the dog in the saliva of the tick. The tick saliva actually helps protect the Lyme bacteria from the host’s immune system.

Once under the skin the bacteria proliferates and then begins to spread through tissue. The organism moves through connective tissue into joints and stays extracellular (outside the cell). The bacteria is very good at avoiding the immune system and can change shapes if needed to prevent detection by the host defenses. Note that 90% of dogs exposed to the Lyme bacteria do not develop any symptoms. For those dogs that develop symptoms; the host immune response to the connective tissue migration of the bacteria; is likely a big part of the disease process.

Again clinical signs develop in 10 percent of dogs exposed. Signs usually develop 2-5 months after exposure. These signs can include fever, enlarged lymph nodes, joint swelling and pain and lameness. The first leg and joint affected is usually closest to the tick attachment site and then spreads from there. Further some patients will develop kidney disease known as Lyme nephritis. Eighty percent of people with Lyme disease will get a red bull’s eye lesion on their skin; yet this is much less apparent in dogs.

Lyme nephritis develops in 1-2% of dogs with an antibody response to the Lyme organism. This is usually a serious and sometimes fatal condition. The condition leads to kidney failure and is over represented in Labrador and golden retrievers. Other less common disorders related to Lyme disease include heart disease, eye problems, and neurological problems.

Diagnosing Lyme disease usually starts with an Accuplex 4 test that screens for heartworm disease, Lyme, and 3 other tick borne diseases. If this test is positive for Lyme, then further testing is done to look for kidney problems and extra protein in the urine. Many dogs may be clinically normal but simply experienced exposure and an immune response to the Borrelia organism. For dogs with a positive test and clinical symptoms like swollen joints or protein in the urine; appropriate antibiotic therapy should be started.

If Lyme disease is diagnosed early on, then antibiotic therapy can be successful. However when the condition is detected late in the disease and especially when there is kidney involvement the prognosis is guarded even with antibiotic therapy.

In general Lyme disease and other tick borne diseases are on the rise especially in the upper Midwest of this country. Lyme disease is commonly seen in pets living in Dupage County. The disease is mostly preventable by using effective flea and tick prevention throughout the year. The newer monthly oral flea and tick preventatives such as Nexgard and Simparica are highly effective and available through veterinarians.

Lyme can be an insidious disease as well as life threatening. If as a pet owner you are out and about with your dog it is important to be informed of the risk of tick borne diseases. Surveys show these disease are on the increase in our neighborhood.