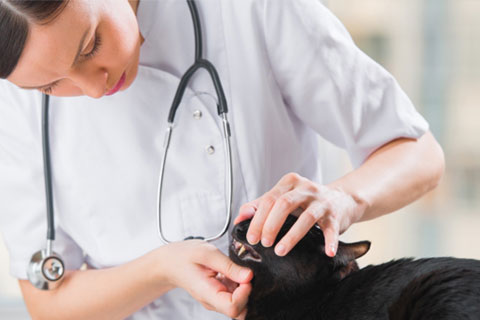 The growth of pet health insurance businesses and large hospital groups has led to the availability of larger data sets about cat diseases. Through scientific advancements this data can be analyzed strategically to identify genetic tendencies. Further there is a deeper understanding of both the canine and feline genome. Veterinary medicine is moving in the direction of understanding canine and feline diseases on a genetic basis, in fact this is the future for pet health care.

One reason that it is important to recognize diseases that have a genetic basis, is that these diseases tend to be chronic and will require long term management. The top five conditions in this article are complexly inherited involving multiple gene combinations and environmental factors.

Feline lower urinary tract disease (FLUTD) is the most frequent hereditary predisposition observed in practice affecting up to 2% of all cats. Persian cats are at increased risk and Siamese are a decreased risk for FLUTD. Although the mode of inheritance is not known, genetic markers have been identified in cats with FLUTD. Once FLUTD is diagnosed practitioners know that the disease can recur if environmental stress factors are not controlled. Interestingly cats without the genetic marker for FLUTD will not break with the disease in a stressful environment.

Diabetes mellitus is number two in frequency and is more prevalent in Burmese, Siamese, Norwegian Forest Cat, Russian Blue, and the Abyssinian. Obesity is a predisposing factor; but in addition a gene mutation has been identified that is similar to findings associated with type 2 diabetes in people.

Lymphocytic or plasmacytic inflammatory disease is number three in frequency. This refers to cats with stomatitis or inflammatory bowel disease. In this disease genetic mutations have not been found but “liability genes” have been found in people and the German shepherd dog. It is suspected the same genes are present in cats. In this condition there are environmental variables that include diet and stress. When subjected to a provocative diet or stress only cats with the tendency will exhibit disease. Further cats with this condition have a lifelong propensity.

Polycystic Kidney Disease is the most common single-gene feline disorder seen in veterinary practice. It is caused by an autosomal dominant gene for which there is a genetic test available. 38% of all Persian cats have the defective gene. Unfortunately most of the cats develop kidney failure around the age of 7 years. If considering a Persian kitten the parents should have negative genetic testing prior to purchase. Ultrasound of the kidneys is useful but no longer the standard of care in screening for Polycystic Kidney Disease.

Number five in the top five most common inherited feline diseases is the all to common Hypertrophic Cardiomyopathy (HCM). 33% of Maine Coon cats and 20% of Ragdoll cats carry a gene mutation that affects the heart muscle. Many of these cats will die prematurely as early as 7 months of age. A genetic test is available for both these breeds. HCM also occurs in random-bred cats and individual cats of other breeds. The specific gene mutations in these cats are not identified at this time.

In time, treatment methods will be aimed at diseases on a genetic level. In the past ten years technology in veterinary medicine has changed hugely; but my sense is that in the next 10 years the change will be even greater. Understanding genetic mechanisms will open the door to greatly positive change in the treatment of these diseases.

Dr. Alan Main is the owner of West Suburban Veterinary Practice and his dedicated team have been providing services to the West Suburban Humane Society for over 10 years.