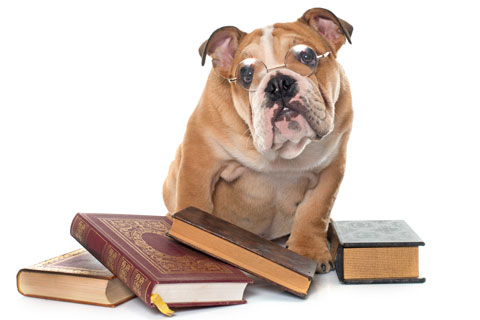 Often pet owners inquire as to whether their pets see in black and white or color. Cone photoreceptors are responsible for color vision in all species. The richness of color and the number of shades are determined by the number cone populations at the back of the eye. In humans there are three sets of cones hence the term trichromatic. People have peak absorbance in the red green and blue wavelengths which are considered their primary colors.

Dogs and cats are dichromatic meaning they have 2 cone populations. Answering the above question, yes our pets do see color! Domestic animals absorb the blue wavelength the best but not the green and red. Therefore dogs and cats do see color but not as rich as we see color.

Interestingly humans are not at the top of the color vision scale. Certain fish and birds are tetrachromatic, meaning they have a fourth set of cones. These species are able to absorb light in the ultraviolet spectrum giving them color vision significantly richer than humans.

In contrast, herbivores with their lateral eye orbits have a small forward binocular field but have no blind spot to the rear. This means they have 360 degree panoramic vision. Since they are not predators, they sacrifice binocular vision for their own protection.

Pets are able to watch TV, however it is less perfect than it is for humans. In pets the response rate of the cones in the retina is slower than in people. Pets have a difficult time fusing the TV images into a continuous image. For pets the images are flickering rather than continuous.

As for night vision it is true that pets have better night vision than humans. In fact, in cats their night vision is 6 times more sensitive than people. Cats are superior due to their larger cornea and pupil, and the increased number of photoreceptors at the periphery of the retina.

Lastly, we will look at visual acuity in dogs and cats. In general image resolution in pets is less than people. For example a dog would need to stand 20 feet from the same object to see the object as well as a person standing 75 feet away. It turns out about 66 percent of Rottweilers are near sighted, and many Australian Sheperds are far sighted. In cats their visual acuity is slightly worse than that of a dog. For cats what they gain in terrific night vision is lost in daytime acuity.

Clearly dogs and cats see the world differently than we do, yet there is enough overlap that we can understand each other.