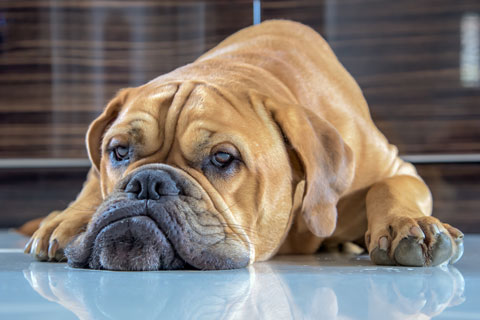 Do dogs get esophagitis; sometimes known as: “GERDS” (gastro-esophageal-reflux disorder)?

Esophagitis is more common than most veterinarians and pet owners might think. Most cases of esophageal irritation and inflammation are caused by the reflux or back flow of stomach fluid up into the esophagus. Stomach fluid is very acidic and the esophageal lining is not equipped to handle the acidity.

Other causes of esophagitis include ingestion of caustic material and certain medications like doxycycline. In fact doxycycline that is in capsule form can cause esophageal stricture in cats.

Esophagitis can be difficult to recognize even though it occurs commonly. In mild cases there may be minimal symptoms. These symptoms might include missing an occasional meal, odd lip smacking and licking at things more than usual, and perhaps regurgitation. More severe cases could include drooling, lack of appetite, neck pain, and refusing to swallow.

The vague symptoms and range of symptoms can make esophagitis difficult to recognize. Looking at the esophagus with an endoscope is the only way to definitively diagnose esophagitis. Endoscopy does involve anesthesia, but can be completed quickly. In the evaluation of esophagitis a visual inspection is often enough to make the diagnosis. This means collecting biopsy samples is often not needed.

One common event that can lead to esophagitis is prolonged anesthesia; especially when the patient is laying on their back. With anesthesia the tone of the esophagus is weaker and hence stomach fluid can reflux more easily; and pool in the esophagus. Therefore it is important to monitor post op patients for any gastrointestinal symptoms that might relate to acid reflux.

Mild cases of GERDS can be treated successfully with medication. Severe cases, especially if not recognized early on, can be difficult to treat, and may lead to strictures in the esophagus.

Treatment involves three tactics. First and foremost is to neutralize the stomach acid. This requires the use of drugs known as proton pump inhibitors like omeprazole. These drugs inhibit gastric acid secretion and need to be given twice daily. Mild cases are treated for 7 days and severe cases are treated for 30 days.

Second, is the mucosal protectant, sucralfate. This drug is best used in the slurry form, and will bind to ulcerated areas to protect the healing bed.

Thirdly are the use of prokinetic drugs like cisapride. These drugs help the stomach to stay empty and also tighten the lower esophageal sphincter. Omeprazole and cisapride are the most important of the three medications.

In order to diagnose esophagitis one has to first consider the condition as a possible differential. Unfortunately, esophagitis can be overlooked or confused with more common stomach problems. Delay in treatment can lead to a worsening condition. Hopefully this article will increase awareness of esophagitis and lead to earlier treatments, as well as less pain for our patients.